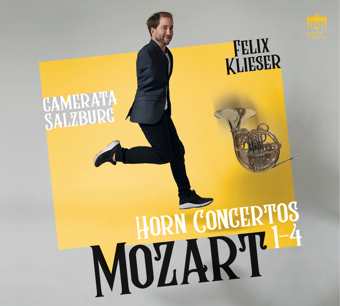 At the tender age of nine, Felix Klieser dreamed of being able to play Mozart’s horn concertos. Today, 18 years later, that dream has finally come true and Felix Klieser now performs on the world’s foremost concert stages, playing the very works which are part of any horn player’s core repertoire. Yet he took his time before recording all four of Mozart’s horn concertos: only after releasing three successful CD albums and winning an ECHO Klassik award and the Leonard Bernstein Award did he go to Salzburg, in September 2018, to record them with the famous Camerata Salzburg ensemble. The album will be released on March 1, 2019.
Mozart always composed his works for wind instruments with a specific soloist in mind. Numerous anecdotes about those musicians and their relationship to Mozart abound. This goes for the horn concertos. The horn player Joseph Leutgeb, a close childhood friend of Mozart’s, was more than once the butt of the composer’s innate love of jests, mockery and similar sorts of nonsense. We know that Leutgeb once had to kneel in a corner until Mozart had finished composing, and was then ridiculed as an ass, ox and fool. Even in 1791, the year of his death, Mozart could not resist making fun of his friend, gleefully writing to his wife Constanze that he had called on Leutgeb as “a long-standing close acquaintance from Rome”, prompting Leutgeb to spruce himself up “like on a Sunday, putting on his finest clothes, and beautifully coiffed”. Nor could Mozart resist telling his “Stanzerl” how things had gone: “You can imagine how we laughed at him. I simply must have a fool on hand.”

Interpreting Mozart’s music is however not all fun; it requires hard work. Felix Klieser reports on his many years of studying and performing the music: “Sometimes, there is just half a bar between sorrow and joy. Working out the refinements of this music was perhaps the biggest challenge of this project. I consciously allowed myself plenty of time to familiarise myself over years with each little detail of this fantastic music and to work out my own interpretation of it, paying the greatest of respect to the composer.” The spirit of Mozart is nowhere more palpable than in Salzburg, the composer’s home city and nowadays something akin to a cult site. And there can hardly be a more suitable orchestra to play with than the Camerata Salzburg, since his music is in their blood. It is thanks to this constellation that Felix Klieser was able to present the perfect ideal of his take on Mozart’s music. “I am proud and immensely grateful that this childhood dream has now come true with the wonderful Camerata Salzburg. There can hardly be any other orchestra that gives such fantastic performances of Mozart’s works. Together we have explored the simply endless spectrum of the Mozartian sound world,” the hornist enthuses.
Camerata Salzburg is one of the leading chamber music orchestras worldwide. Their concert activities on home ground in Salzburg are enhanced by invitations to the great concert venues of the world, including New York and Beijing. The Camerata is one of the permanent ensembles at the Salzburg Festival and the Mozartwoche festival. 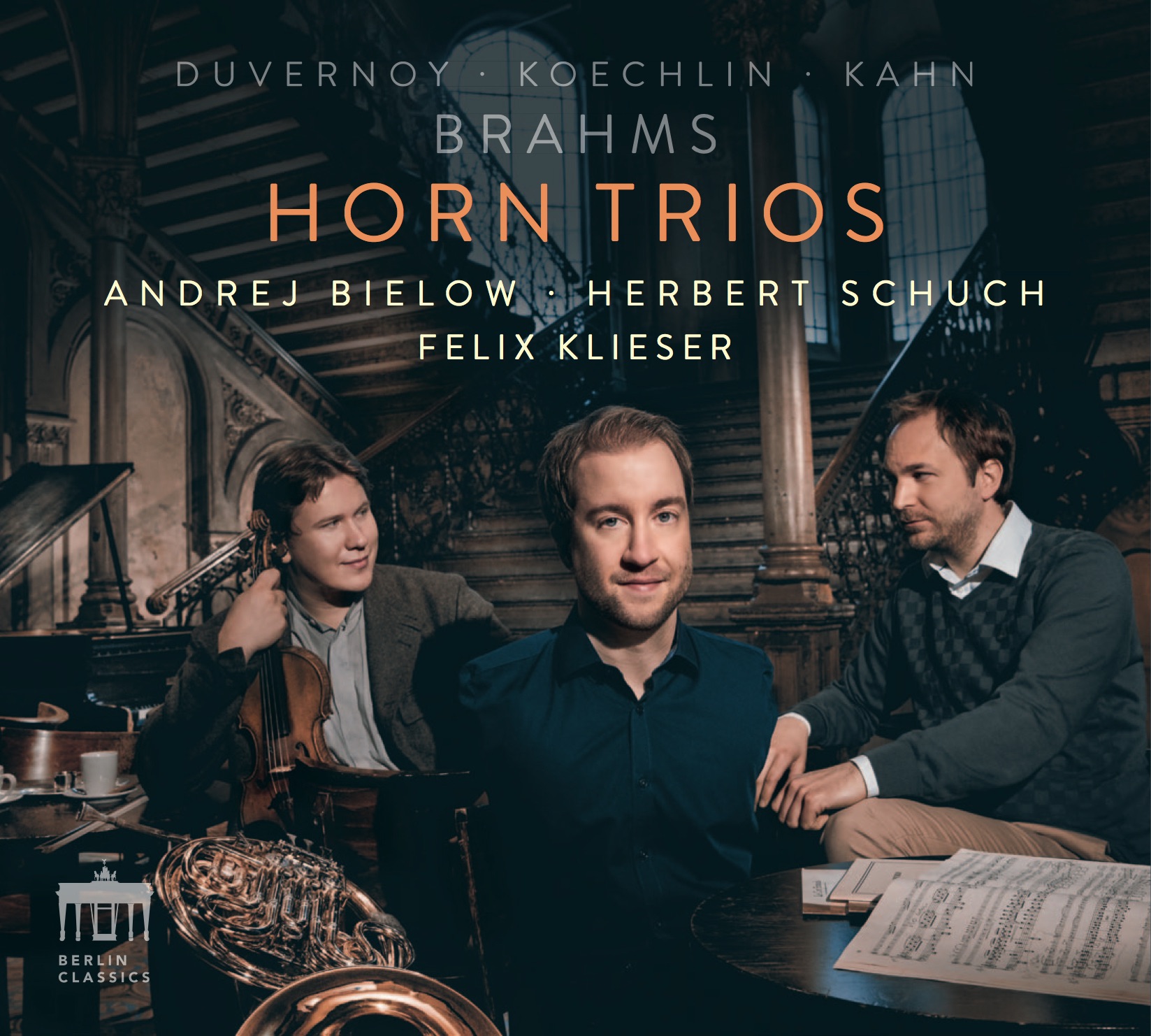 Felix Klieser first began to take a serious interest in the Horn Trio of Johannes Brahms (1833–1897) at the age of thirteen. Back then he was just a junior student at the College of Music and Drama in Hanover. He bought several different recordings of the work, including one featuring the hornist Peter Damm, whom he was later to meet at a master class in Dresden. “I picked up quickly that Felix was extraordinarily talented. He was able to elicit from the horn a soft, warm sound, a distinctly Romantic horn tone,” says the former horn-player of the Dresden Staatskapelle in high praise of Klieser in the booklet text to the young musician’s new CD entitled “Horn Trios”, released on the Berlin Classics label on September 29, 2017. “The Brahms Trio is the pride of the horn literature,” according to Peter Damm, a view he shares with Felix Klieser. That led him to seek out other such works, perhaps even unknown literature from the horn trio genre. He came across the French composer Frédéric Nicolas Duvernoy (1765–1838), who was hornist at the Paris Opera, Fauré pupil Charles Koechlin (1867–1950) and the Mannheim-born Robert Kahn (1865–1951) who was hounded by the Nazis. The result is a programme of works spanning nearly 100 years of development of the horn trio, which bring Felix Klieser a further step towards his goal: to place the horn centre stage as a colourful and profoundly Romantic instrument. “I am pleased to take you on a new journey through the world of the horn,” he begins his personal foreword to the CD booklet. Such a plan requires the right chamber music partners, whom Felix Klieser has happily found: at the piano sits the outstanding and sensitive Herbert Schuch, while the violin is played by the Ukrainian ARD competition winner Andrej Bielow.

“It was a wonderful experience for us to learn these pieces, some of them quite new to us, thereby expanding the scope of the chamber music genre in an exciting way,” enthuses Felix Klieser. The three musicians have known each other for years. Before playing together in a range of different formations, Felix Klieser even took courses as a young student with his two colleagues, 10 and 12 years his senior. “Horn Trios” is Felix Klieser’s third CD. His debut album “reveries” (2013) featuring Romantic music for horn and piano earned him an ECHO Klassik award as “Newcomer of the Year”. In 2015, he released the CD “Horn Concertos” with works by Joseph Haydn and his younger brother Michael and Wolfgang Amadeus Mozart, recorded with the Württemberg Chamber Orchestra of Heilbronn under Ruben Gazarian. That same year, he received the Leonard Bernstein Award at the Schleswig-Holstein Music Festival. His book entitled “Fussnoten – Ein Hornist ohne Arme erobert die Welt” (“footnotes – a horn-player without arms conquers the world”, 2014, published by Patmos) has since been translated into Japanese and Chinese, to accompany his tours to those countries. This new recording confirms to all those who recognised his talent at a young age and encouraged him and believed in him, that Felix Klieser is an exceptional artist. The young student has now risen to be a master of his instrument. 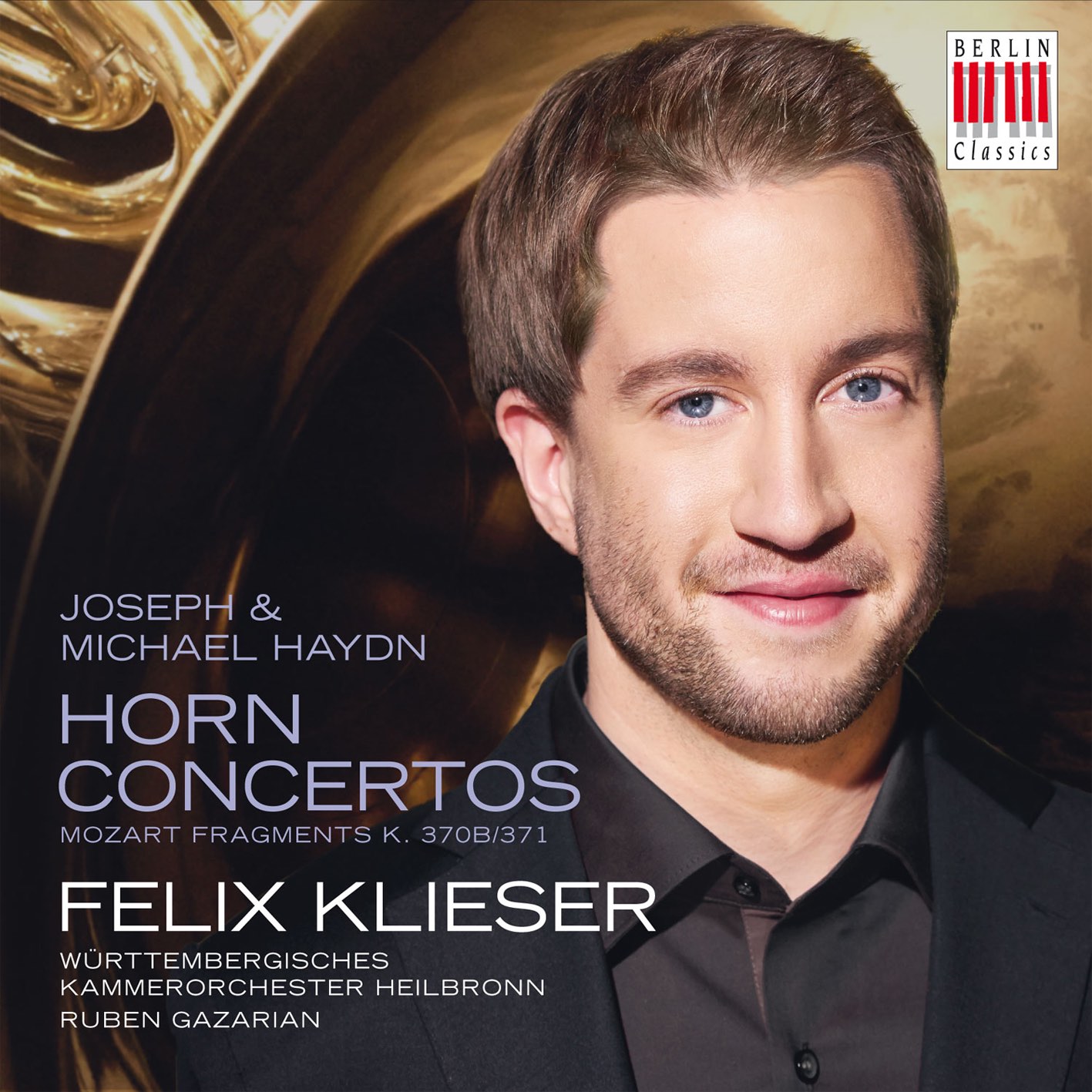 The full spectrum of the horn’s aural range. ECHO prizewinner Felix Klieser now follows his debut featuring Romantic chamber music with a second album: an orchestra recording of works by Joseph and Michael Haydn and by Mozart. This album is a Classical one! While the first of Joseph Haydn’s two horn concertos calls for the high-register horn, the second was composed for its lower-tone brother. Horn players generally specialize in one or other instrument. Felix Klieser plays both. “Addressing the requirements demanded of players of both the high and low horn on one single CD was a challenge for me, but it was a task I relished: it meant I could present the full spectrum of the instrument’s aural range,” enthuses the young hornist, born without arms, who declared his wish to play the horn at the age of four. Unlike the concertos by his famous older brother, Michael Haydn’s Concertino for Horn and Orchestra is seldom heard in concert.

And Mozart? The closing horn concerto is one reconstructed from two fragments, and seldom played; one might call it Mozart’s “zero concerto”. “All of the works share a certain lightness and cheerful manner. That was the link that brought these three works together on one CD,” explains the 27-year-old musician. In the renowned Würtemberg Chamber Orchestra of Heilbronn under the direction of Ruben Gazarian he has found the perfect partner for his endeavour. “We worked on the music with a great degree of intensity and passion, as well as fun and enjoyment. May I invite you to share this enjoyment with me when you listen to the music.” 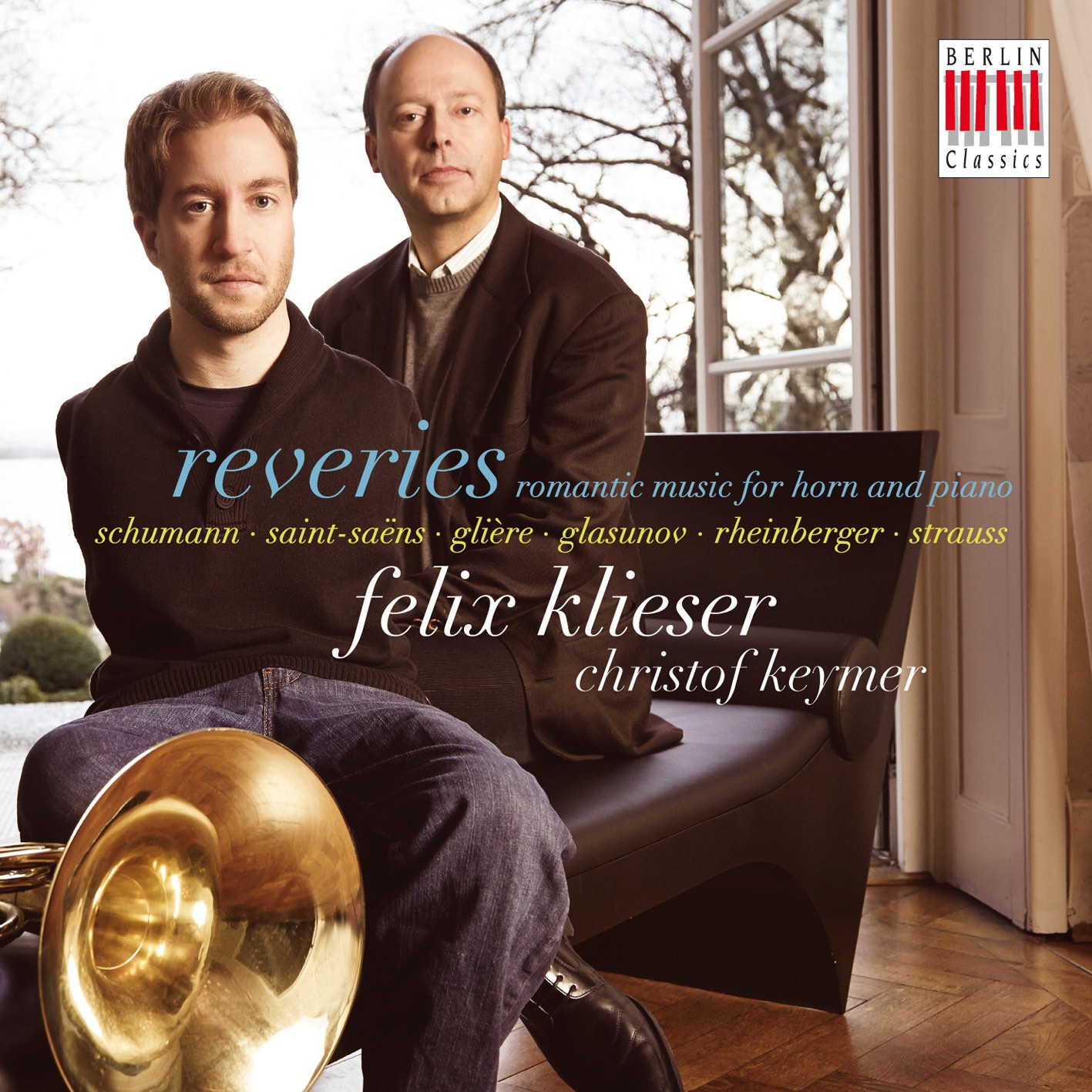 The young hornist Felix Klieser is an exception. Not only is he, at the age of 22, already one of the best horn players in the world, but he has mastered his instrument perfectly despite his handicap. Felix Klieser was born without arms and plays horn with his feet. How does it work? “No problem” says the young artist and shows his tripod. The instrument is attached to it, in range to the mouth. He sits behind it and lets his foot take over what other horn players do with the left hand: operate the valves.

Already as a five-year-old he was given horn lessons after convincing his parents of his firm intention to learn this instrument. Felix Klieser proves himself to be a highly talented musician – at the age of 17 he became a junior student at the Hanover University of Music and Drama. He is awarded the “German Music Prize” in the competition “Jugend musiziert” and is awarded the “Life Award” in the category “Art and Culture”. Klieser played with Sir Simon Rattle at the Berlin Philharmonic and performed with Sting on his world tour. In 2011 he takes up the regular music studies in Hanover. There he meets the pianist Christoph Keymer, who has accompanied him on the piano since then.

With “Reveries” the sympathetic artist presents his debut album – in coproduction with the Bavarian radio. He has selected the repertoire, romantic works for horn and piano. “The time of romance fascinated me from the beginning,” says Klieser. In no epoch is the sound diversity of the instrument more effective. Already Schumann enthused “The horn is the soul of the orchestra”. He recognized the musical possibilities of the then-novel valve horn and wrote one of the most famous compositions for horn and piano. For Felix Klieser, Schumann’s homage to the horn was the incentive and source of inspiration at the same time. In addition to Schumann’s Adagio and Allegro, he chose various works by composers from France, Russia and Germany for his debut album. The range is varied, the mood pictures are charming. “There are so different cultures, but all from the same time,” says the young hornist. “It was a time of upheaval, but there was also a new beginning, which you can feel in the music.” It is not surprising that Felix Klieser is enthusiastic about this time – he is still on his way to a new life.
Dein Warenkorb ist leer!
0